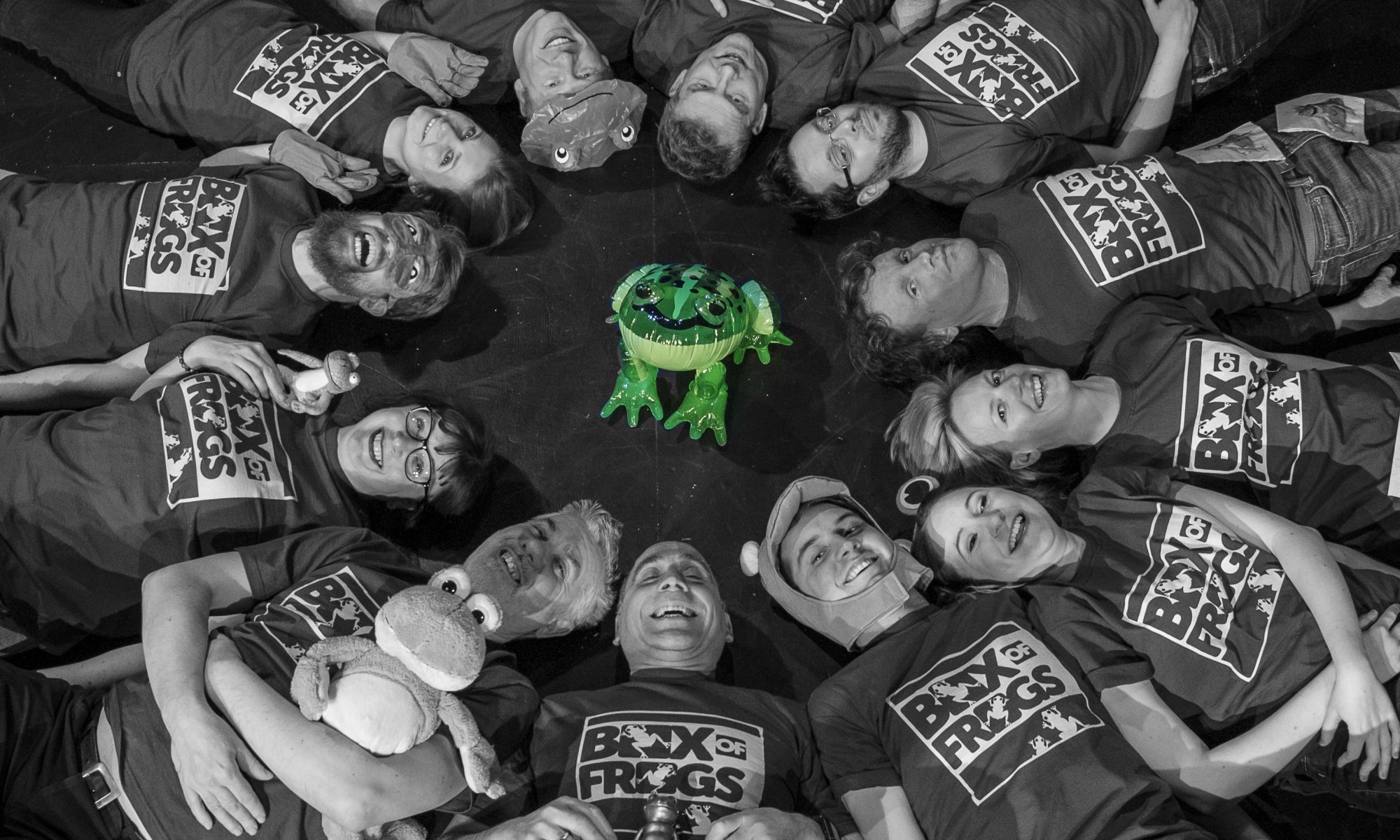 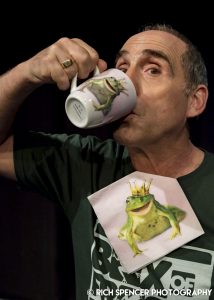 Jon founded Box of Frogs 9 years ago, and has been teaching and performing Improv ever since. He has trained with The Maydays, Dummy, Bill Arnett, and completed the five week intensive with iO in Chicago.  As well as Box of Frogs, he currently performs with improv groups The Kneejerks and Off Broad Street. He has guested with companies all over the UK, including Same Faces, Coventry Improv, and ImproFest UK.  He has taught countless workshops, including for Sprout Ideas, Jumprov, and the British Improv Project.  He is on the board of the Applied Improvisation Network, an international group who teach the skillset of Improv in non-performance environments enable personal, social, corporate and political change.

Jon has leapt from an aeroplane in flight 1,932 times.  Fortunately, he has exactly the same number of successful parachute landings. 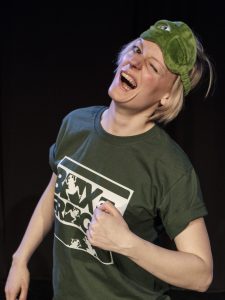 Suzie has a background in theatre but was fully converted to the scriptless joy of improv after stumbling upon a Box of Frogs class in 2014. She has since trained under improv veterans from iO, Dummy, The Maydays and The Showstoppers. Suzie loves being part of the growing Birmingham improv scene and regularly performs with The Kneejerks, Off Broad Street and squidheart.

Suzie spends a lot of time trying to convince her small children to eat their vegetables or just, you know, listen to a single word she says. 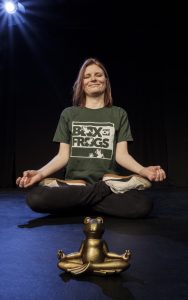 Kate Knight is a writer, facilitator, teacher and improviser.  She has trained in long-form improv with Dummy, The Maydays, The Annoyance and iO, and many more besides.

Kate is also a member of Birmingham improv powerhouse The Kneejerks and is one half of squidheart, a two-person multi-character narrative improv duo, with Suzie Evans. She has performed with a wide range of improv groups on stages across the country in theatres, bars, pubs, and even a hospice.

Kate has taught improv to adults and children since 2012, and is a regular teacher at the British Improv Project. She also recently organised Birmingham’s first ever workshop for female-identifying and non-binary improvisers.

Kate is a redhead, which means she produces her own vitamin D. Like a boss. 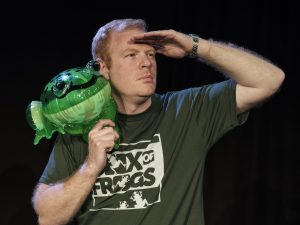 Richard started improvising in 2002 where he co-founded the Cambridge Impronauts (then called ‘ICE’). In 2013 he founded Cheltenham’s biggest improv group ‘Comic Sans Script’ – where he still currently resides as Artistic Director. He has studied under Keith Johnstone, Monkey Toast, and Showstoppers; and has guested with ‘The Same Faces’ & ‘Bunkum Factory’ and also is an occasional teacher with the British Improv Project. However, obviously, nothing compares to the Box of Frogs experience!

When not improvising Richard’s trying to design a unnecessarily large IT security board game. 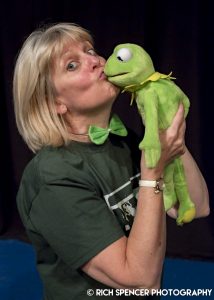 Karen trained in drama and dance before becoming Artistic Director of her own theatre company that specialised in outdoor and street theatre. She has studied mime, clowning and circus skills in the past and has performed with Foghorn, Ministry of Improv, Off Broad Street and Box of Frogs. She lectures in Devising, Theatre in Education and Laban Movement for Actors, as well as being a specialist in Children’s Play, something that she finds very useful when improvising! 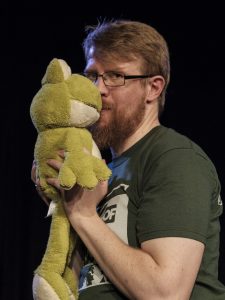 John is an actor, improviser and moral philosopher.  Appearances include Trigorin (the Seagull) for the Shakespeare Institute Players, Tom Watson (Parade) and France (King Lear) for the Crescent Theatre, Jupiter (Orpheus in the Underworld) and Major General (Pirates of Penzance) for University of Birmingham G&S Society, and Hel Helson (Paul Bunyan) for the Barber Institute’s Summer Festival Opera.  John directs musical troupe Off Broad Street, and is on the committee for Birmingham Improv Festival.  He’s a singing student of Gwion Thomas, and post-doctoral researcher in surveillance ethics at University of Warwick.

John’s local café has named a breakfast after him. 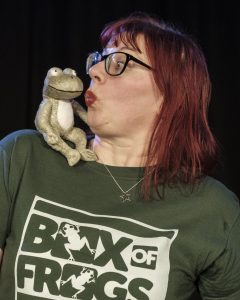 Jen has been performing improv for 4 years after attending a workshop at her friend’s  cafe on her birthday for ‘something to do’  . Little did she know, it would be become somewhat of an obsession . Her first show was actually the first live improv show she was due to see , but  cast illness meant she stepped in !

Jen performs regularly with The Same Faces in Northampton , City Impro in London and also  with new musical improv group ‘Off Broad Street ‘

She has trained with Jules Munns of the Maydays , Will Luera and Armando Diaz .

Jen was once the lead singer of a 90’s  grunge band based in South Shields . They didn’t reach the heady heights of Joe McElderry or Little Mix. 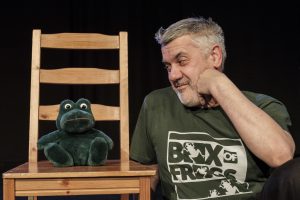 Nick did his first Improv class in 1980. Unfortunately no one told him that was what it was, so there was a slight hiatus of 30 years before he managed to find another class. The third class was the following week, a laudable 156000% faster.

Nick’s other hobby involves pretending to be a warrior and dressing as a goat; viewed in this light Improv comedy is a veritable step towards maturity.

In his spare time Nick enjoys talking about himself in the 3rd person. 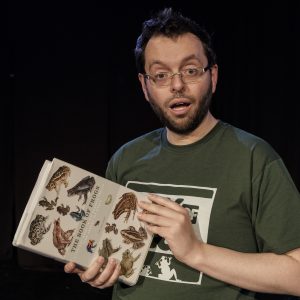 JP has performed with Box Of Frogs since 2014.  Starting with a beginner’s course taught by Jon Trevor, JP has trained all across the country and covered everything from musicals to improvised Shakespeare.  He also performs regularly with The Kneejerks and is proud to be part of Birmingham’s fantastic improv scene.

JP runs MidlandsImprov.com, providing news & reviews of all the improv shows in Birmingham and beyond. 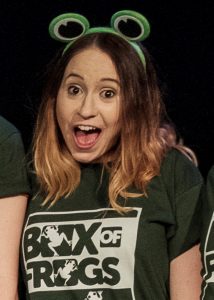 Marianne starred as the lead role in her primary school leavers’ play about cockney refugees and then, on account of the pressure from the media, took a 14 year hiatus from the stage.

She’s since dusted off her cockney accent and has been with Box of Frogs since 2015 when she took Jon Trevor’s improv beginners’ class.

Marianne appears as an extra in a Bollywood film. Her right elbow can be seen in some of the posters for Teri Meri Kahani (2012). Google it. You won’t be disappointed.